April 16, 2018 – Los Alamitos – Crowds arrived hours before the meeting. Outside, bullhorns and chanting can be heard blocks away. Photo: Chris Rusanowsky / The Sprawl

The American Civil Liberties Union of Southern California, along with other groups, is suing the city of Los Alamitos for an ordinance which exempts the city from SB 54, the so-called “Sanctuary State” Law.

The law prohibits state and local officials from assisting federal agents to enforce immigration law, unless compelled to do so by court order.

Several other cities and the county have decided to support Attorney General Jeff Sessions’s lawsuit against the state, arguing that SB 54 and two other laws aimed at opposing Trump’s immigration policy are unconstitutional. Sessions is arguing that these laws are a violation of the supremacy clause, which grants the federal government precedence over state law. While other municipalities either joined the lawsuits or sent supporting documents, Los Alamitos is the only one to pass an ordinance that directly contradicts the state law.

“The United States Constitution takes exception with the California Values Act, and that is what I proposed to my colleagues,” says the ordinance’s sponsor, Councilmember Warren Kusumoto.

“I can’t think of a better, more forceful way to say we’re on record [opposing SB 54] than to add an ordinance to our municipal code.”

In a statement to the press, Sameer Ahmed, staff attorney at the ACLU Foundation of Southern California said, “ The City Council cannot appoint itself judge and jury and decide which state laws it will and will not follow… That is clearly unlawful.”

Reverend Samuel Pullen of the Community Congregational United Church is one of the plaintiffs in the lawsuit and said, “Los Alamitos’s illegal ordinance causes serious harm to my ability to serve my congregation… Immigrant worshippers are less likely to come and participate in church services because of their fear that Los Alamitos and its law enforcement officials are helping deport members of our community.”

They held a press conference at the Los Alamitos City Hall on Wednesday where they presented the lawsuit to the City Clerk. The lawsuit claims that the ordinance is unlawful, squanders city funds, and “threatens residents’ safety and well-being.”

Two days before, the City Council voted 4-1 to officially implement the ordinance which they passed last month.

The scene was raucous, with protesters on both sides loudly expressing their beliefs on the grounds of the Civic Center and in public comment which went on for around 4 1/2 hours.

April 16, 2018 – Los Alamitos – A Somalian man waves Trump campaign and U.S. flags high. He says he and his family came to this country legally. Photo: Chris Rusanowsky / The Sprawl

The night of… inside

After genial city business, like presenting an award to a Los Alamitos police officer for drunk driving enforcement, the council voted to drop many of the agenda items for the evening and commence on the issue that drew the large crowd that evening.

Barbara Farrell of Los Alamitos said “SB 54 is the law of our state. As a citizen of Los Alamitos, I demand that you uphold that law. Vote no, do not tear our families and communities apart. We are a diverse community, and we love our diversity. We love our immigrant neighbors.”

“The reason for the ordinance was ostensible to be concerned about conflict between state law and federal law,” said Joel Block, a resident of neighboring Rossmoor, labor attorney and a former State Assembly candidate.

“That conflict is being resolved in the lawsuit by Attorney General Sessions against the state of California that ultimately will probably go to the highest court if they accept it to make a final determination on that issue. Adding another ordinance is gonna create another lawsuit which is gonna create the possibility that you could get two different decisions.”

Gerri Mejia, former mayor of Los Alamitos, voiced her support for the ordinance and advised fellow supporters to “put their money where their mouth is.”

“There’s a “GoFundMe” page that will help people who support what you’re doing tonight, and what you did at the last council meeting, to be able to give funds… They can give to that cause and they can make sure that this city, the first city, the smallest city, took a stand and said we need to make sure that we secure our residents.”

Mayor Troy Edgar created the “GoFundMe” to pay for legal costs for the predicted challenge of the ordinance. 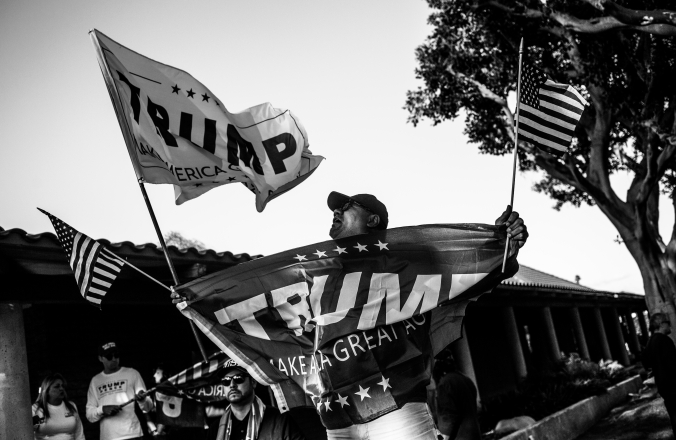 April 16, 2018 – Los Alamitos – A Somalian man waves Trump campaign and U.S. flags high. He says he and his family came to this country legally. Photo: Chris Rusanowsky / The Sprawl

Betty Robinson, a 60-year resident of Orange County, argued: “Supporters of illegal aliens say that there are 800 crimes listed in SB 54 that allow for I.C.E. to be notified. The California State Sheriffs Association opposes SB 54 and lists examples of crimes committed by illegal aliens for which I.C.E. would not be called such as: serial thieves, assaults to police officers, chronic drug users, known criminal gang members, and repeat drunk drivers.”

Orange County Sheriff Sandra Hutchens has publicly come out against SB 54, going so far as to publicly post inmate release dates on their website, giving I.C.E. an indirect notification of undocumented immigrant releases.

Councilmember Mark Chirco was the lone vote against the ordinance.

After asking the city attorney how much money had already been spent on the ordinance—thousands—Chirco learned from Los Alamitos Chief Eric Nunez that SB 54 has had little to no effect on Los Alamitos policing. He then went on to deliver an impassioned speech against the ordinance.

Chirco, the only lawyer on the city council, argued that the council did not have the legal authority to determine whether or not SB 54 is unconstitutional.

“I’m not saying whether there is or is not a conflict [between SB 54 and the U.S. Constitution]. I know who will say that—a federal judge.”

He argued that, along with being highly divisive, the ordinance has wasted Los Alamitos’s precious money and resources.

“Tonight, we’ve got a couple of agenda items that we’re not going to address. They were on the agenda last month, we’re not addressing those as well. That’s our actual city business.”

“Defending this flawed ordinance, could and would literally bankrupt our city. How then do we pay for our wonderful police department? Pay for our community events? Pay for our excellent city staff? We don’t. Do we increase taxes? I don’t want to do that.”

Councilmember Richard Murphy argued that while he supports the idea of the ordinance—“it’s easy to vote against a bill [SB 54] that protects illegal alien criminals”—there should be more time to review its legality.

He proposed to table the ordinance, allowing for city staff to come back with more options. His motion was not seconded and died.

“I urge the council to slow down and get it right.”

Murphy ultimately voted in favor of the ordinance.

Mayor Edgar dropped a Navy adage while delivering his enthusiastic support for implementing the ordinance: “You can’t keep polishing the cannonball, you gotta shoot it.”

He spoke proudly of the trend that Los Alamitos started and refuted those who criticized the “circus” that was occurring at city council meetings such as this one.

“Don’t be afraid of democracy. That’s what this is right?”

Outside the council chambers, a chaotic mix of protesters on both sides made loud declarations of their beliefs.

“Hey hey, ho ho, all illegals got to go” went one chant.

“Up up with liberation, down, down with deportation” went another.

Shouting matches erupted throughout. A few physical altercations took place between the opposing protesters, but they were quickly stamped out by Los Alamitos police officers who were monitoring the situation closely.

Along with Los Alamitos P.D., members of the National Lawyers Guild were there observing. One volunteer explained that they often observe protests in the hopes of deescalating any possible altercations and to document any conflicts that might arise with law enforcement. 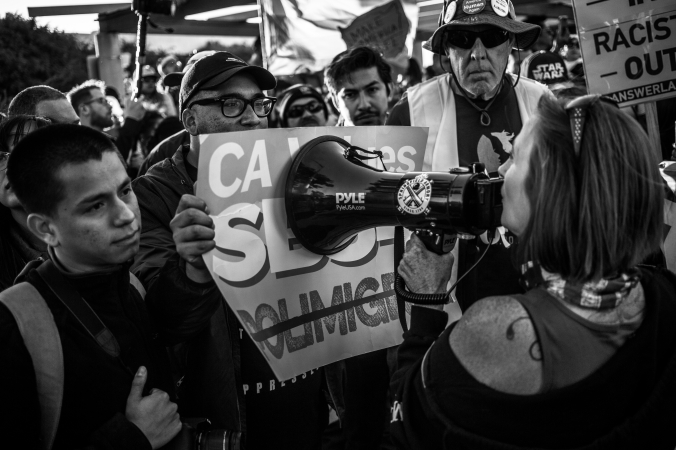 “There’s been quite a bit of shouting back and forth, people having arguments with each other, but other than that there are people on both sides expressing their opinions very forcefully.”

At moments, grounds around city hall felt like a music festival, with drums beating and a keyboardist playing Mexican music, encouraging people to dance.

Erik Garcia, a member of Decolonize O.C., says of the other side: “They’re pushing a political agenda that endorses hate.”

Matthew Hom, of Bend the Arc, a progressive Jewish organization: “We don’t support instilling fear in our communities and [the City Council] using their power to make a divisive situation.”

Mike McCoy, who was holding a sign reading ‘Build A Wall, Deport Them All’: “The state of California doesn’t have any jurisdiction over immigration law.”

Killings by undocumented immigrants was a popular argument amongst protesters supporting the ordinance.

“These two victims were killed by illegal aliens,” Lynn explained.

While there is no concrete data on the rate of killings committed by those in the United States illegally, several studies have found that undocumented immigrants commit crimes at a lower rate than people born in the U.S.

“You break the law you go to jail,” one anti-illegal immigration protester announces while a Los Alamitos police officer looks on.

Jake is a Los Alamitos resident and was waving a flag along Katella Boulevard with a ‘Make America Great Again’ hat and shirt. He said that most of the people in his community support the city council’s decision.

Andre Soriano, a fashion designer, legally immigrated to the United States from the Philippines. He believes it unfair for undocumented immigrants to not have to go through the rigorous citizenship process like he did: “We came here legally, we believe in the constitution of the united states of America, and it’s not for free… [Immigrants] have to work for it. They have to be legal.”